Bring the Beat Back (Drums Along the Potomac) 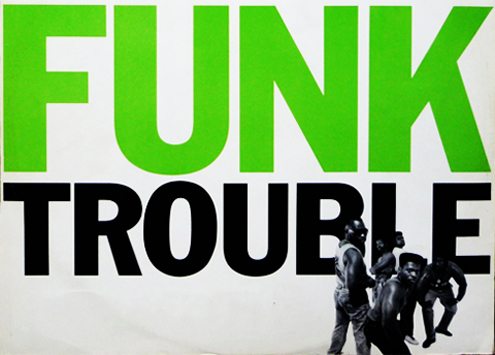 Despite all the good things that came out of the music of the 1980s, by and large it was a fairly dismal decade. Or at least it was as far as mainstream music went, with a lot of what you'd hear on FM radio or in clubs. Lots of shitty guitar solos, no shortage of triffling go-nowhere trends.

Main beef being with how the beat got simpler. In many instances starkly, minimally -- almost metronomically -- so. I dunno how or when the trend actually started -- it seemed to gradually creep in at some point around 1982 until in gained damn-near complete hegemony. Maybe it had something to do with how the later phase of disco had simplified the beat, and then again with how dance music that came after the post-disco backlash stripped it down even further. Or maybe it was Prince's "When Doves Cry" (known in some quarters as, "Where'd the fucking bass go, homes?") that violently unended the scales, that made it official as the musical trend of the decade. Not sure, but things got pretty stark for a good long stretch after that. Yeah sure, this was all concurrent the hip-hop's gradual steps toward mainstream acceptance. But the mid-school era of mid-digitally sampled of breakbeats and loops was still several years away (mainly due to the affordability of the equipment). Most rhythm tracks for hip-hop cuts either being laid down in the studio by a session drummer laying down a steady beat, or programmed on a drum machine -- most often an 808. The Roland 808 could be a marvelous thing -- capable of complex patterns of the polyrhythmic "Latin" variety, but why put that much effort if you didn't really need to? If there was anything that characterized the sound of "true" hip-hop by the decade's midpoint, it was the punishing jackhammer kick of the 808, pummeling away with inhuman severity.

There were the odd exceptions to much of this, of course -- like Sheila E and her timbales, or the occasionally more-intricate-than-usual rhythm track on some popular "Latin freestyle" number. But as far as what dominated a lot of dancefloors and much of the airwaves -- it was likely a policy of rhythmic austerity had been put in place, or merely decreed the sound of the zeitgeist. Like ridiculous big hair or parachute pants, it was what was in fashion.

Which is why go-go was such an incredible thing when it first began to circulate, was greeting with some sets of welcoming ears, and almost -- but not quite -- became the Next Big Thing.*  Hailing from the city of Washington D.C., Go-go was a locale-specific, homebrew affair. It clearly hadn't kept up with the times, had chosen instead to shoulder its way against the tide of the crowd. It had actually been around for a good many years in gestational form, with some of its key contributors having been veterans of the 1970s funk scene. In fact, the 1970s had seen a couple of proto go-go tracks make it onto the American charts -- Black Heat's "No Time to Burn" in 1974, and then Chuck Brown and the Soul Searchers' "Bustin' Loose," the latter of which briefly became a #1 hit on the Soul charts in 1978. The sound of go-go proper wouldn't start to emerge until around the end of the decade, right about the time that disco was being shown the door.


Go-go remained an isolated scene throughout the early years of the 1980s, was limited to the release rosters of small D.C.-based record labels. But in the middle of the 1980s some major labels were taking notice and the music started to gain national attention. Musically, it was clearly a whole 'nother thing entirely -- something distinctly apart from what else was going on. For the marginally-attentive, the music's trademark call-and-response vocals had them thinking it must've been part of the "rap thing." To anyone with memory of the prior decade, it may've sound like mid-period P-Funk, but streamlined and re-tooled and tilted into polyrhythmic overdrive. To others, the extensive percussion section of your average go-go outfit might've brought to mind Afro-Cuban rhythms. To someone else it may have sounded like the music had a strong "Southern" connection, specifically to the sort of drumming often heard on the streets of New Orleans. Whatever the case, it was clear that the music was as live and as loud and as deeply funky as things could get. I was like something lots of people had been missing, had hungered after, without having realized it until it came along and smacked them upside their earholes.

But as far as national exposure went, go-go's popularity turned out to be peripheral and brief. Yes, for a brief while, a number of commercial hip-hop acts (Salt-n-Pepa, Kid 'n Play, et al) would include a token go-go track on their latest album -- maybe as a way of paying tribute to the music, maybe just as a move for hopefully selling a few extra units in D.C. record stores. And of course there was the appearance of the band E.U. in Spike Lee's second feature film, School Daze.

There was even, at one point, an attempt to do a film about D.C.'s go-go scene. Titled Good To Go, and with Don Letts as one of the production's instigators, it was originally conceived as a movie focusing exclusively on the music. But a short time into production, a number of the film's backers reputedly got cold feet and backed away. In order to salvage the thing, it was quickly transformed into a crime drama set in D.C., with -- get this -- Art Garfunkel playing the lead role. The music portions of the film were quickly benched, or relegated to the sidelines of the movie's story. (The film itself, after release, would come & go without notice, and would for a few years circulate on video under the [re-]titled Short Fuse.)

If anything, go-go commanded attention because it was a groove that asserted authority. The music's brazenly insistent, exhortative horn-yness, its density, the occasional Clavinet cameo in the mix were all signifiers of a funk 'nuum that refused to die, of a party that never ended. Add to this that a fair number of the music's central figures -- Chuck Brown, et al -- were veterans who'd been working the D.C. circuit for years. Even a gaggle of relative newcomers like Trouble Funk exuded seniority -- partly because of the tightness and expertise of their rhythm section, but also because the raspy vocals of bassist Big Tony Fisher projected a wordliness beyond its years.

* SIDENOTE: True, there was plenty of action and alternatives in the occurring along the margins -- garage, house, techno, etc. But for the most part, many of these developments didn't travel widely, took years to gain broad exposure or acceptance. (Or that was the case with much of the U.S., anyway.) I, for instance, was living in the Deep South at the time, and heard very little of it. What I did hear though, on the radio and elsewhere, was a lot of booty-bass, "quad" type fare. Electro-funk had been big with a certain audience in the South, and once it waned it was kept alive (and refitted with some extra swing) in the South by way of the so-called "Miami Bass" sound -- an indie cottage industry of DJs and trackmakers scattered throughout the region, from the Atlantic side of Dade County all the way over west to Houston. Isht was everywhere providing you went to certain clubs or tuned to certain stations, crowding out most hip-hop that might've filtered down from the East Coast. And it wasn't until about ten years later that I'd learn what a marginal and region-specif phenom the thing was.

Relatedly, just uproad from the D.C. of the late 1980s, a set of associates were crafting the beginnings of their own new sound -- starting to kick around the first "doo dew" beats that would eventually morph into the sound of Bmore club" music years later. All of these scattered heterotopias of the groove might be viewed as home-turf DIY remedies for the vagaries that arise from the physical limits of how the entertainment industry operated at the time -- a way of filling the many gaps left by shitty distribution of material product, lazy radio programming and bookings. But more often, however, these localized or regional responses arose from a shared affinity or sense of dissatisfaction, and from a mutual agreement that other motherfuckers just ain't bringin' it, or may have missed the point completely.

Can't help but wonder if today's R 'n' B would be very different indeed if go-go grew as much as hip hop.

Right. By 1990, a lot of R'n'B was already starting to siphon heavily off of hip-hop. So while I'm not sure if it would've turned out very differently, I'm sure it would've changed the equation by a significant degree.

The chants, the percussion, the fullness - a little more sunny and Californian, perhaps, but drumwise, a detour from the standard P-Funk/Sly Stone model?

Yeah, exactly. The early funk element that gradually became a dimmed shadow of itself w/ later disco -- complete with the latin influence/percussive patterning.

Funny thing is, a lot of early stuff by the Soul Searchers and E.U. from the '70s was a just standard funk. And you find the prototype for what inspired go-go turning up in sources from outside D.C.. Like here...

And there are ishtload more examples, of course.

I am very much impressed with your article and I am happy that I am associated with your site.Excellent posting, and need your tips next time.
djembe