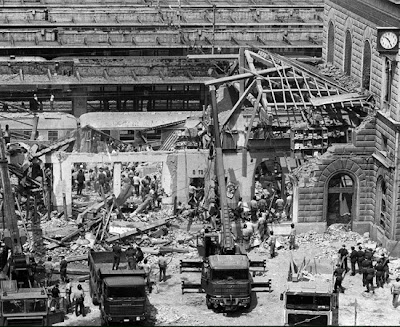 23 kilograms of nitro-glycerine, T4 and Compound B stuffed in a suitcase abandoned in the second class waiting room of the west wing of the train station at Bologna. A bomb designed to have the maximum impact, not only on the building – the entire wing was destroyed in the blast, along with the Ancona-Chiasso train waiting to depart by the nearest platform – but also in terms of the number of victims. A Saturday morning at the beginning of the holiday month in one of the busiest railroad hubs in the country, and the second-class waiting room, where you would find the highest concentration of people. The bomb killed 85 of them and maimed or wounded more than 200. Such was the force of the blast that of one of the victims, Maria Fresu, no remains were found. She had been travelling with friends, whose bodies were recovered. So was her three-year old daughter’s. But all that was left of Maria Fresu were a handful of scattered fragments. She had been disintegrated.

Clearly this isn’t the story of the clock that stopped at ten twenty-five on the morning of August 2, 1980, as if it too was in shock. It’s the story of the people involved: those inside the train station when the bomb went off; those who came in to join the rescuers, outnumbered and unprepared; those who assembled the bomb and those who planted the bomb (who aren’t necessarily the same people); and later those who fabricated the evidence to derail the investigation, and then the investigators who slowly and laboriously sifted through the evidence, both actual and fabricated, and eventually found some but not all of the culprits. Because finally this is a most Italian story: a story of obfuscation, deception and collusion, a story of institutions parallel to the State or hidden within the State whose job was to ensure that the truth, the whole truth, would never be known. And without truth, without justice – as was said in the first anniversary of the bombing – history itself is rendered meaningless.

It took fifteen years to secure the convinctions of two of the three people who materially carried out the bombing – neofascist terrorists Giusva Fioravanti and Francesca Mambro – along with operatives of the military intelligence service and the leader of the Masonic lodge P2 responsible for a series of progressively more elaborate and, in the final analysis, successful smokescreen operations. It is thanks in no small part to those efforts that we know who and we know how, but we still don’t know on whose orders and why. The Bologna bombing is in this respect the culmination of what chroniclers and historians call the strategy of tension, but also its most perplexing and horrific example. This was not 1969, the year when the strategy was inaugurated. By 1980, the Italian state appeared no longer vulnerable, and the need to strike fear into the population in order to placate revolutionary movements and workers’ struggles on the one hand, and foster the demand for authoritarian measures on the other, had lost almost all of its urgency. Yet it was at this time that the largest scale mass murder was committed. The Bologna station bombing killed more people than those of Piazza Fontana, the Milan police headquarters, Gioia Tauro, the Italicus and Piazza della Loggia put together. It was the atrocity that contained all other atrocities, and yet lacked their political motivation, that is to say a connection – however deranged, however criminal and appalling – with the present.

Murder for murder’s sake: that is perhaps the only form of terrorism deserving of the name. And this above all else I remember of those years. Is there anything more profoundly unsettling for a child than to see fear on the faces of his parents, of the adults in his life? I was nine years old when the Bologna bombing took place. We were holidaying in Yugoslavia with friends. We got hold of an Italian newspaper, perhaps it wasn’t even the next day but the one after that. But the consternation and the fear of my parents and the others, I remember them well. 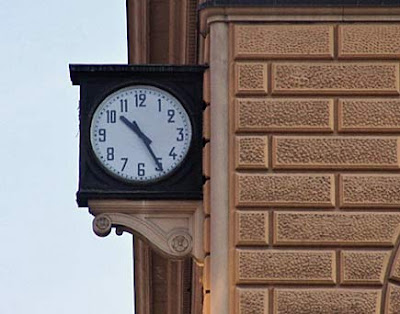 This is not the story of a clock. It couldn’t be. It’s the story of Maria Fresu, who at ten twenty-five of August 2, 1980 simply ceased to exist, and we may never know why. It’s the story of her three year old daughter and of the other victims and of the wounded and of their loved ones, who for over three decades have fought and continue to fight for the truth and justice that they were denied. The association of the families of the victims of the Bologna station bombing is a microcosm of the Italian society of those years, formed by people whose commitment arose not out of a shared political or ideological background but in the most tragic and random of circumstances (almost literally any of us could have passed through that station on that day). And out of those circumstances grew the determination not to let the bastards get away with it, to pile the pressure on in those early years when the investigation had came close to being abandoned, and then again after the grotesque verdict of acquittal of 1990, which the Court of Cassation judges who ordered the re-trial later called ‘illogical and incoherent’. But still there is so much that we don’t know about that massacre, as well the ones that preceded it. Almost the only thing that has been established to a forensic certainty is the involvement of sectors of the State in the cover-ups and the sidetrackings. So perhaps that is the closest thing we have to a motive. Raison d'état. For the good of the State.

And so this might as well be the story of that clock, for if you must imagine that for the members of the association time really stopped at ten twenty-five of August 2, 1980, then perhaps the same can be said for our democratic institutions. Not that it was always that way for that clock itself. A few months after the bombing it was fixed, yet most people thought that it hadn’t – this is where the story gets a little peculiar – and the station administrators kept being asked to set it at ten twenty-five so that pictures could be taken or for the commemorations, which apparently was a rather difficult business, so that when the mechanism broke down, in 1995, the opportunity was taken not to fix it, and the hands were put back at ten and five, where they remained until August of last year. It was then that the clock was fixed a second time. Somebody had complained, although there have always been complaints: there is no plaque underneath it and so some people quite understandably trust the clock, and occasionally they miss their train. But this time the administration relented and so the clock was put back into service, which generated even more complaints from the association of the families of the victims and from all the people who thought that it shouldn’t have been, and so about a month later the hands were put back at ten and five one more time, and there they remain. At least for now.

The clock is a reluctant, accidental memorial, thus a fitting metaphor for the manner in which these crimes of our history are remembered: that is to say intermittently, hesitantly, and so long as it isn’t too inconvenient. Fioravanti and Mambro – who even before the events of August 2, 1980, had already been directly responsible between them for a dozen murders and for ordering the assassination of investigative magistrate Mario Amato – are out of prison and live very respectable lives, writing books and working for the NGO Hands off Cain, which opposes torture and the death penalty. They never admitted their role in the bombing, let alone named its instigators, and served sixteen years in prison plus 10 more on probation each out of a sentence of 8 consecutive life sentences plus 134 years and 8 months of detention (Fioravanti) and 9 consecutive life sentences plus 84 years and 8 months of detention (Mambro). These almost comically hyperbolic convictions, too, and the gap with the actual time spent behind bars, suggest a most elastic notion of time on the part of our justice system. The clock above the west wing of the train station at Bologna is not the only one that operates in fits and starts.

But I’m not upset that these two loyal foot-soldiers walk freely, not as such. The far greater outrage is that the historical and political conclusions were never drawn from all that bloodshed, and that what we all knew, what we had ample evidence for, was never officially acknowledged: namely, that there were some in positions of power who saw those murders as necessary for the preservation of the State; and that therefore our public institutions as they exist today can be said to be founded no longer on the principles of anti-fascism, nor on a civic, democratic response to the left- and right-wing terrorism of the Seventies, but rather on a series of acts of repression and state-sponsored murder designed to protect and cement the existing structures of power. The bombing of the train station at Bologna was the last and most spectacular of these acts, it was the final object lesson in the brutality that is demanded in order to maintain the peace. Eighty-four bodies had to be mangled, crushed or torn to pieces. The eighty-fifth had to be disintegrated. A blast. A freeze-frame. For all those lives, and in our history, it is always, it will always be ten twenty-five.
Posted by Giovanni Tiso at 05:10