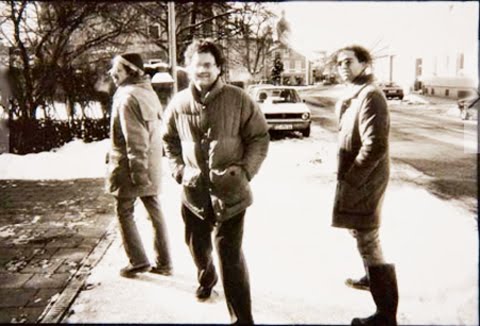 New York City's a good "working musician" kind of town...if you know how to hustle, you can always find a gig. Such was the case with the members of Shockabilly. As the world would come to know them, Shockabilly consisted of guitarist Eugene Chadbourne, bassist Mark Kramer, and drummer David Licht -- all three of whom had played in differing capacities throughout the eclectic and more "avant" quarters of the city's music scene. The band had originally been started by Chabourne and had a revolving personnel (including at various times John Zorn and cellist Tom Cora) for a few years before finally simmering down into a trio. The group's formerly diverse set had by that point settled into that of "covers" act -- a lounge act whose repertoire most involved running the Nuggets songbook through the shredder. "Psychotic Reaction," "Eight Miles High," "Purple Haze" -- it was all fair game. Eugene brought the amplified garden rake to up the noise factor, while Kramer brought along some tape machines that allowed him to punch up random snippets and "samples" culled from the detritus of the media landscape.

The trio had a nice run out of it for a while, even landing a couple EPs out of it, mulchifying a number of "classics" and having a long and gleefully noisy romp on the grave of the Age of Aquarius. When the opportunity arose to record a full-length album, however, it seems the band decided that the schtick might wear a little thin over the duration of a long-player, and decided to augment the outings with a larger share of their own original tunes. The result was a pair of albums -- Vietnam and Heaven (1984 and 1985, respectively) -- that amounted to a dark, surreal, and often bleak and nightmarish plunge into the country's recent history. Popping up in the middle of the "Reagan Years," some of the songs sounded less like a cry of protest than a resigned and bitter croak drifting up from the bottom of a well.

YYes, there was a new round of hippie-era favorites being lined along the trenches for a hearty mowing-down. "Born on the Bayou,""Instant Karma,""Lucifer Sam,""Life's a Gas," et al make an appearance, but they only served to thread the narrative like recurring brown-acid flashbacks, mere bric-a-brac adorning a revisitation of the American Dream -- a waking dream now strewn with shrieks and howls from monster movies, the babble of TV commercials and political speeches, the aforementioned croak, and the rumble of cognitive dissonances bubbling up through the socio-economic substrata. In the end it amounted to scattered scenes from a road movie, one where the journey's a scrambling flight from an impending apocalypse. You pile all your belongings and essentials into your car and getting the hell out of the city, away from the vulnerable coast…punching across the FM spectrum for some driving music, only to find a selection of "oldies" that now sound mockingly confident and alien to your ears…all of which is overlaid by news reports and howls of the damned bleeding through the transmissions and following you as you drive inland, as you try to get as far from it all as you can in search of refuge…driving into the landlocked depths of the country, away and into the heartland, the sounds of a nation's recent cultural history folding back on itself, swallowing its own tail, chasing you -- a reprise of John Lee Hooker protesting "(I Don't Wanna Go To) Vietnam," Charles Manson ranting from prison that he's "your lost son, America," and beatnik poet and former Fugs frontman Ed Sanders stepping in to offer a plaintive critique of U.S. foreign policy in Central America. Eventually the signal fades into static as you approach your destination, which turns out to be a wasteland littered with missile silos and long-abandoned gas stations.

Either that, or the the two albums can be listened to as some sort of evil, bipolar, quarrelsome conjoined twin for Springsteen's Nebraska. You be the judge.


Within a couple of years, the nostalgia industry had stepped to reclaim the 1960s. Some would claim that this revival involved looking back to the decade's idealism, but mostly – some argued– it mostly just amounted to the "Baby-Boomer" generation selling its own past back to itself. Amidst it all, the Grateful Dead experienced a huge resurgence in popularity, their audiences swelled by the ranks of a new generation of fans who followed the band around on tour. The Dead lyric what became something of a recurrent slogan in the years that followed. That slogan eventually becoming the title of a gloating TV special in which Rolling Stone magazine took a gloating 20-year anniversary rewind on its own history..."What a long, strange trip it's been."

To which any number of people probably wanted to reply: "Motherfucker, you don't even know the half of it."

Email ThisBlogThis!Share to TwitterShare to FacebookShare to Pinterest
Labels: brown acid flashbacks, burying the legacy of the '60s, failing to make sense of the past, national denial and delusions of grandeur, Retromania, the Reagan years, US